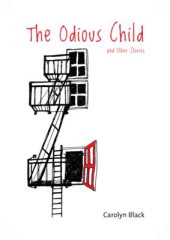 ‘A fragile life form a new writer is – much as with a creature that washes up on a beach, crowds will circle, children will poke with sticks, and the first impressions will be comparisons. Donald Barthelme? Sure, a little. Joy Williams? That’s a good one, but Carolyn Black’s work defies easy comparison. Edward Gorey renting an apartment in Little Portugal? Okay, I’ll just stop now….’  ~Brian Joseph Davis, Toronto Standard

Named by The Coast as a top book of 2011, and shortlisted for a ReLit Award, The Odious Child is a collection of darkly humorous short stories about the body in peril. Stricken characters search for healers, cures, connections, and sex in surreal, sometimes menacing, urban landscapes. Sexual fiascoes keep company with the more bizarre – a baby who cannot smile, causing its emotionally restrained mother to seek help from a holistic baby tickler; a shrunken, derisive Martin Amis who moves into a room within a female writer’s brain; a woman’s head that separates in disgust from her body during a mysterious illness; and an online romance that ends in terror. One story from the collection appeared in The Journey Prize Stories 22, while another was shortlisted for a National Magazine Award.